I started my first account in April 2008 with the minimum required deposit ($4,000), a modest portion of my post-collegiate savings at the time.  The first few months were bumpy, but by the start of the crash in September I’d grown it to over $7,000 and, in the measly notional realm of sub-PDT (Pattern Day Trader), I was happy with my progress.

It didn’t occur to me that trading SKF (this was before FAS & FAZ, kids) was risky; the new ETFs were volatile, but consistently volatile, which somehow made them easier to trade than LEH and AIG.  That’s laughably naive in retrospect (to say that leveraged ETFs weren’t risky, especially for the novice trader that I was) but at the time it wouldn’t have mattered if a ticker traded for 1% or 10% intraday range — I had no context for what a stock should or shouldn’t do.  Early traders might call that beginner’s luck, experienced traders might describe it as learned ignorance — deliberate absence of preconception, of bias — but for me, it was just general stupidity.

Experienced traders might describe it as learned ignorance — deliberate absence of preconception, of bias — but for me, it was just general stupidity.

Over $12,000 now.  The account grew, and I didn’t care to learn more than how to type in a ticker, seeing as I was trading on my laptop from home and having occasional +10% days with almost no skill.  I was a Chuck Norris caricature, roundhouse-kicking anything that stood in my way.  The financial world was crashing down around me like the end of Prometheus, but I felt faster than a fucking spaceship.  At this pace, I thought I could outrun death and taxes.

You aren’t faster than a fucking spaceship.

My trading flourished.  Forget everyone else’s experience; this couldn’t be all that hard.  Bunch of clueless pussies, I remember thinking to myself about traders complaining about the volatility.  I doubt I could’ve spelled “volatility” at the time, let alone define it.  But I could trade it, apparently, as the account stood at $20,000 by Christmas.

There’s a road here in Cincinnati, Ohio, called Columbia Parkway.  It’s the rough equivalent of the West Side Highway for you NYC folk — a winding river-and-city view escape from downtown toward the (for Cincinnati, at least) eastern suburbs, and likely a place of immeasurable contemplation — as professionals decompress amidst their equally-hassled commuting comrades.  I didn’t have to drive to work (work from home? I work from bed) so it never struck me as a place for epiphanies.

It was just after 6:00am and, cruising back from the airport along the Ohio River with the almost-springtime sun peeking over the horizon, singing along to Audioslave’s “Exploder” from behind the wheel, I did the unthinkable.  I said the worst thing any trader can ever say.

“I’ve got this market by the balls.”

The account had grown to $35,000 and — because past performance is obviously indicative of future returns — I could’ve fed a village with the pita chips & hubris (get it?) manufactured by my brain. 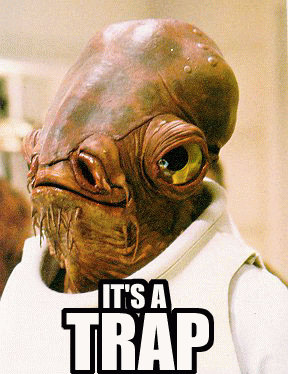 The smartest goldfish that ever lived, Admiral Jeremiah B. Ackbar.  I should’ve listened.

With my fate sealed — unbeknownst to me, of course — I raced home to another exceptional day of trading.  My aggressive position in out-of-the-money calls on the inverse ETFs had paid me nearly $20k over the prior three weeks, so I had no reason to fear even a dramatic reprisal of the bulls.  “Defined risk!”, I’d remind myself, verbally reaffirming trading fundamentals I in no way understood, nor respected.  It was something I’d heard other traders say before and it sounded smart.  I sounded smart.

It might be worth mentioning that since that date — SPOILER ALERT! — the markets, um, have gone up a little bit.  I spent the final nine months of that year losing every dollar I had in the account as penance for ever thinking I was smarter than the market, particularly on the day of THE low.

I’ll never forget where I was when the markets bottomed:  Columbia Parkway, lying to myself about trading while Chris Cornell foretold the fate of my account.